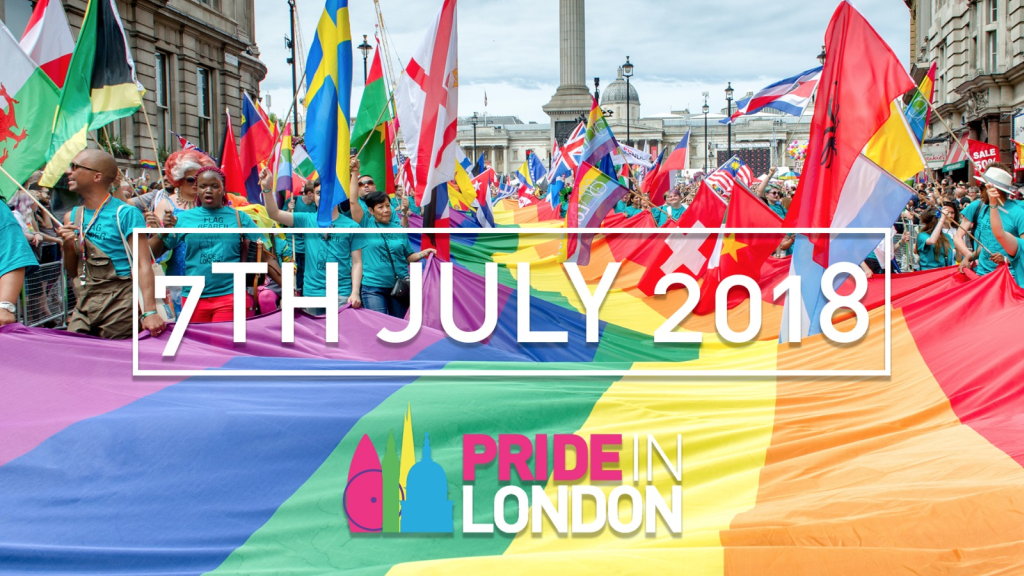 The 2018 Pride in London Parade will take place on Saturday 7 July.   Mayor of London Sadiq Khan announced the date at the Pink News Awards on Wednesday 18 October as he confirmed a new five-year funding commitment for Pride in London.   To build on and ensure the success of Pride in London 2018, a major recruitment drive is underway for over 60 year round roles.

Mayor of London, Sadiq Khan, said: “It has been a real privilege to lead the city’s Pride parade over the past two years and so I’m delighted that City Hall is working on a new five-year funding plan for the London parade. As one of the capital’s cultural highlights, my aim is to safeguard not only its immediate future, but its long-term presence in our city.   “London is an international beacon of diversity, and I’m doing all I can to showcase our capital as the open, inclusive and welcoming place I know it to be.”

Speaking of the importance of visibility, diversity and inclusion, Alison Camps, Co-Chair for Pride in London, urged: “It is vitally important that we fully represent our diverse set of communities as we grow our year-round team. It is our intention therefore to seek out and encourage applications from women, the BAME, bi, queer and trans communities as well as those questioning and those identifying as non-binary, pansexual and genderqueer.

"We would urge anyone who shares our belief in building a Pride for all parts of our diverse set of communities to help us spread the word and encourage those who might not usually think to volunteer to join us in the fight for equality.”

About the benefits of volunteering for Pride, Michael Salter-Church, Co-Chair for Pride in London, added: “Volunteering is a great way to make new friends, build confidence, grow your skills and find a sense of family. Helping deliver Pride in London is also hugely fulfilling.  Pride events are important as they highlight support available for, and groups campaigning to ensure that every LGBTQ+ person can live their life to their full potential, free of persecution and discrimination.”

Applications close 3 November and are listed at our Volunteer with Pride page.

The recruitment drive follows the recent restructure of the Pride in London board to recognise the growing scale of the two week event. The outcome of that recruitment drive will be announced before the end of the year.

Preparations for Pride in London 2018 are underway and details of the parade route and timing, parade application process, wider festival and theme will be announced in due course.