Pride in London launches most ambitious and diverse pride

Pride in London is officially underway with a unique take-over at Tate Britain and the UK’s largest ever Pride campaign.

This week Pride has been running a hate-crime awareness campaign. The opening day of the festival marks the moment that Pride shows the world it can conquer hate with love, replacing billboards and posters displaying messages of hate, with hundreds of messages of love. Messages of love have been appearing on sites all over London thanks to incredible media partners.

The official launch took place at the ‘Queer and Now’ exhibition at Tate Britain, which celebrates the powerful role of the LGBT+ community in arts and culture, with a host of live performances, talks, music, film and dance from artists rooted in the UK's queer community.

In addition, Channel 4 will be broadcasting pride TV adverts for the first ever time, in a series of hard-hitting and poignant films that tell the stories of the constant struggle for acceptance that many LGBT+ people face.

“This is the biggest campaign that we at Pride in London have ever undertaken. At a time when anti-LGBT+ hate crime continues to rise in London, it’s vital that we highlight this problem and encourage all those affected to report it to the Met police. But, crucially, this campaign also allows us to look forward with hope, telling the incredible stories of love that make London the thriving and welcoming city we all know.

"We’re phenomenally grateful to the media owners, production companies and agencies who have donated their time and resources to make this ambitious campaign possible.”

Pride in London's community festival has almost doubled in size since last year, adding many new events that celebrate LGBT+ diversity. For a full list of events got to visitlondon.com/pride

The ‘Love Happens Here’ campaign will play out in two phases; ‘Hate’ and ‘Love’. The first phase drew attention to the rising problem of anti-LGBT+ hate crime in the London with Guerrilla-style fly-postering across the city, a covert take-over of Wi-Fi networks, and statistic led taxi-tops.

At the start of the festival, the ‘Love’ phase of the campaign launched, which saw the stories of hate crime replaced with ones of love, showing London that ‘Love Happens Here’.

The multi-media campaign will also see OOH sites across the city (including fly-posters, large format OOH and the London Underground) filled with stories of love, sourced from diverse members of the LGBT+ community. Each story has been beautifully illustrated in posters created by illustrators and artists, who donated their time for free to the campaign. These ‘Love Happens Here’ prints will also be available from the Tate as part of their Queer Britain season.

All the stories featured in the OOH come from members of the community who have shared their stories on Pride in London’s interactive map: http://bit.ly/2tNaOVo

The campaign has been developed by the Pride partner and agency WCRS.

“It’s difficult to fully appreciate the amount of love and pride that has gone into this campaign until you see the list of credits of all those who gave their time and talents to make this happen. This is a campaign that started from a negative place of hatred and has blossomed into a full technicolour, full volume, inclusive expression of love. The greatness of the creative is matched only by the sheer scale of companies and individuals.”

The enormous out of home campaign would not have been possible without the support of the following partners: 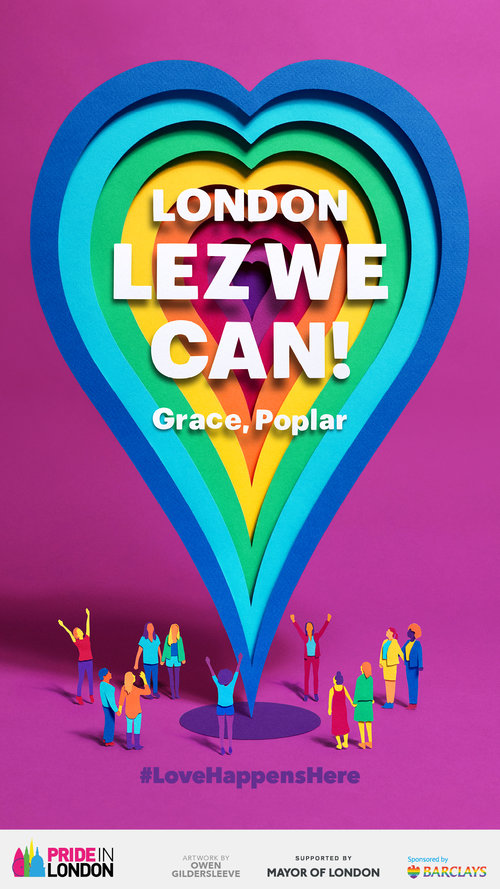 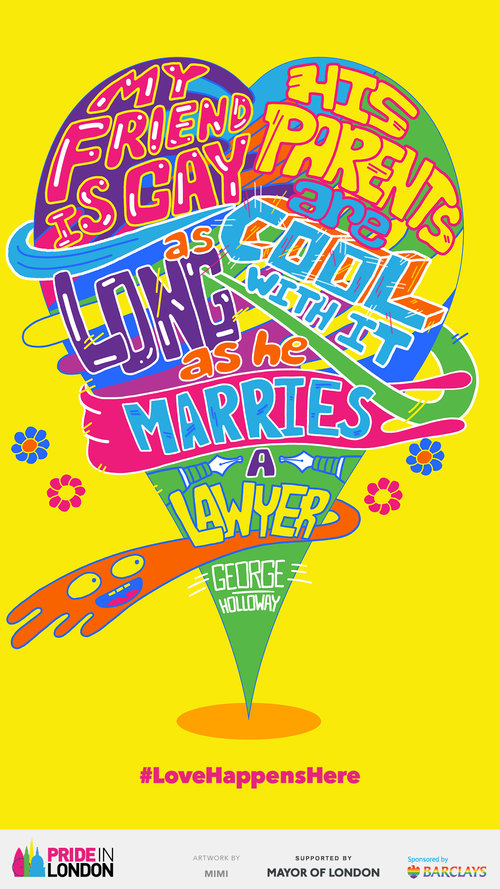 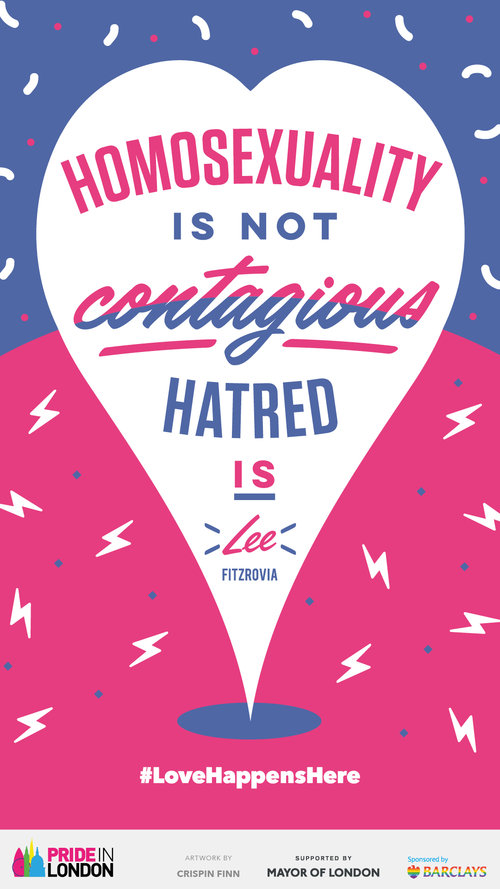 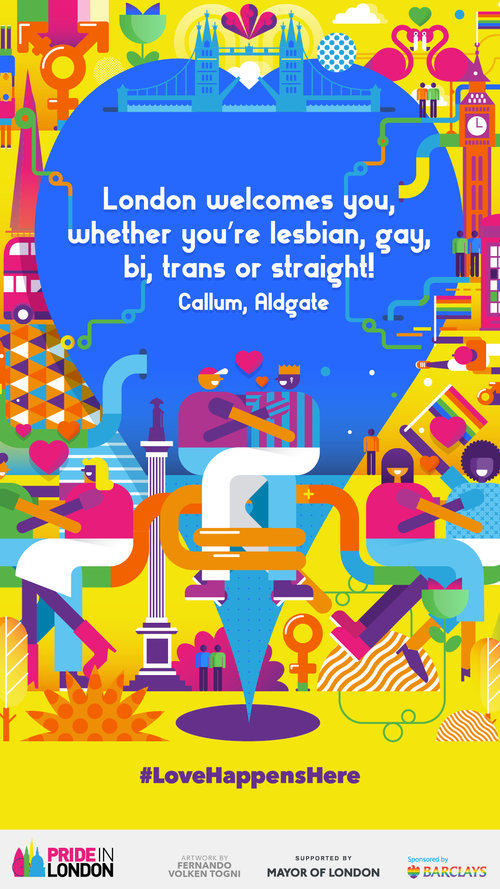 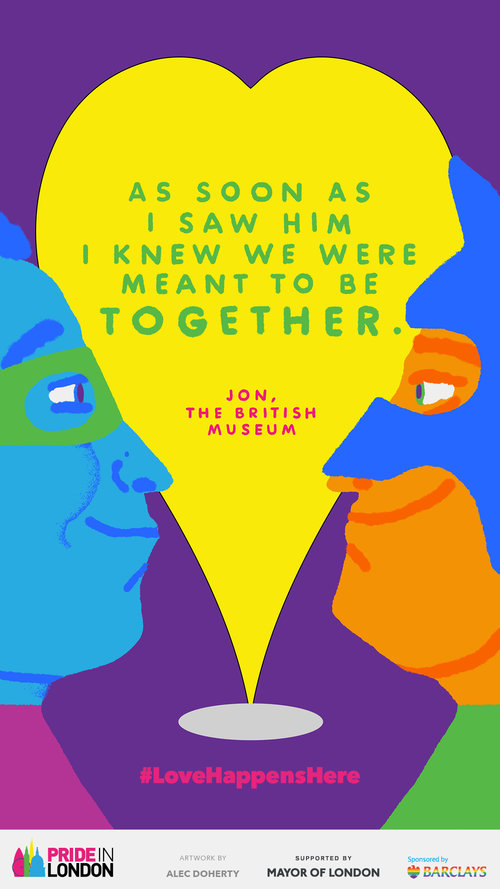 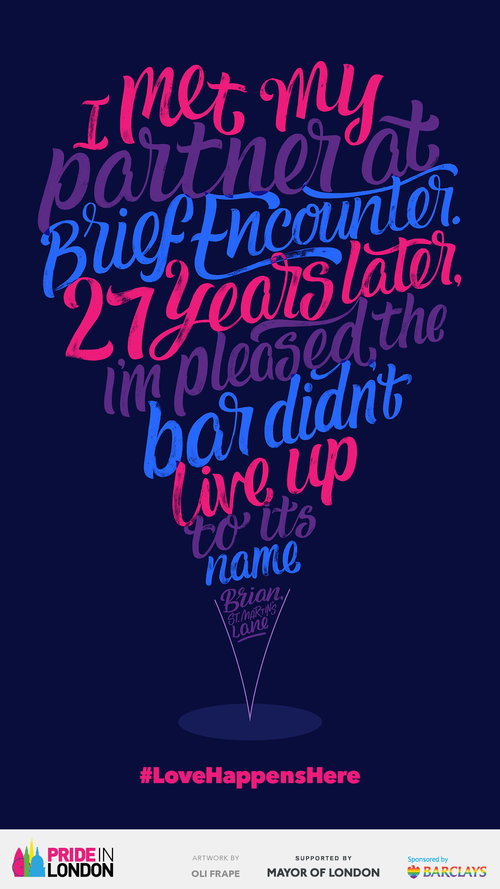 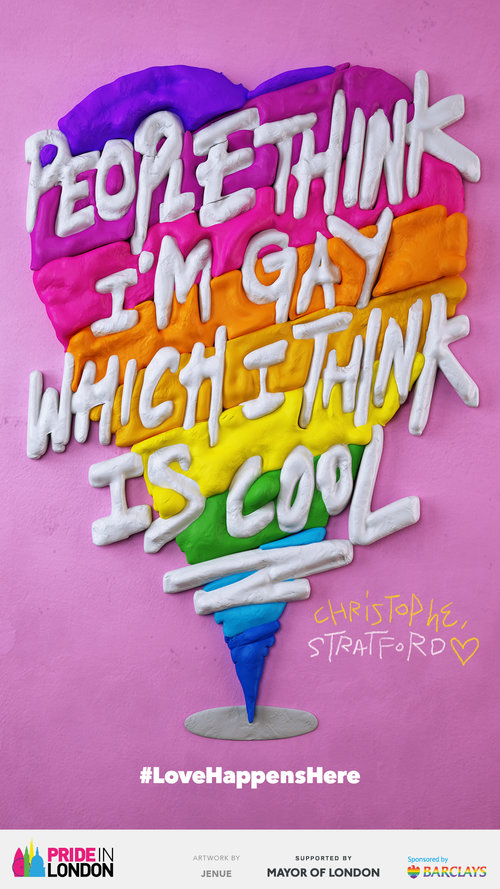 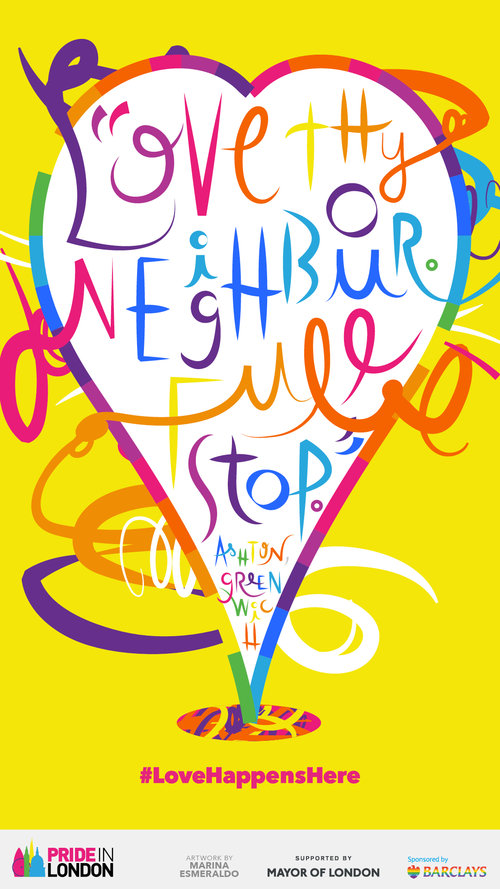 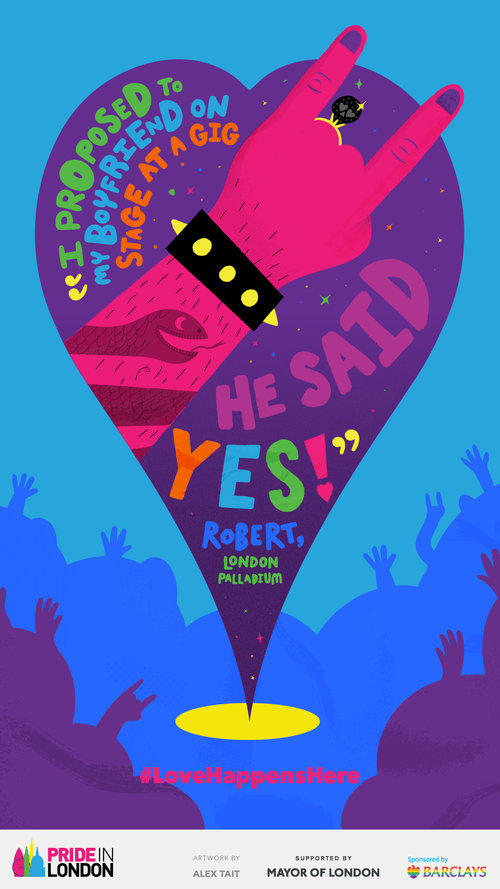 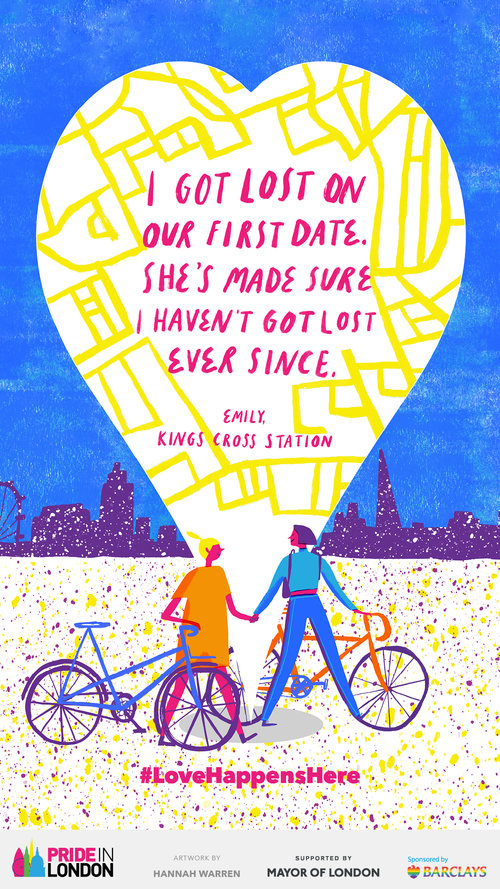 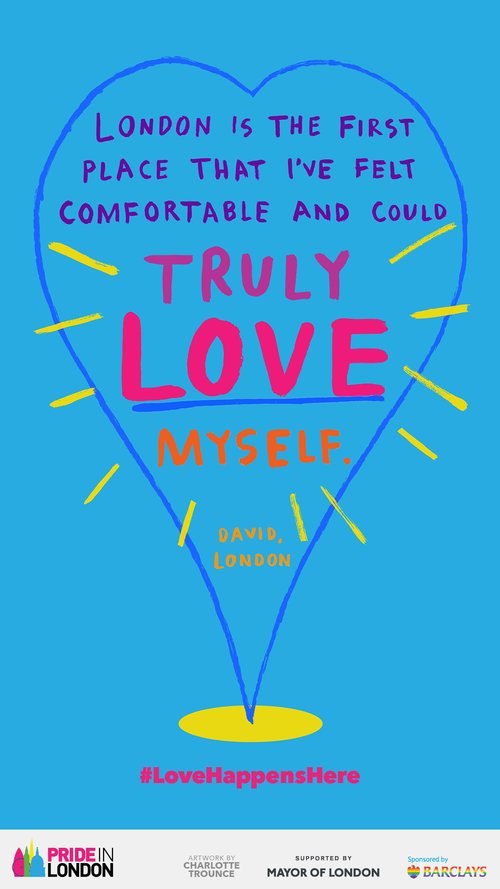 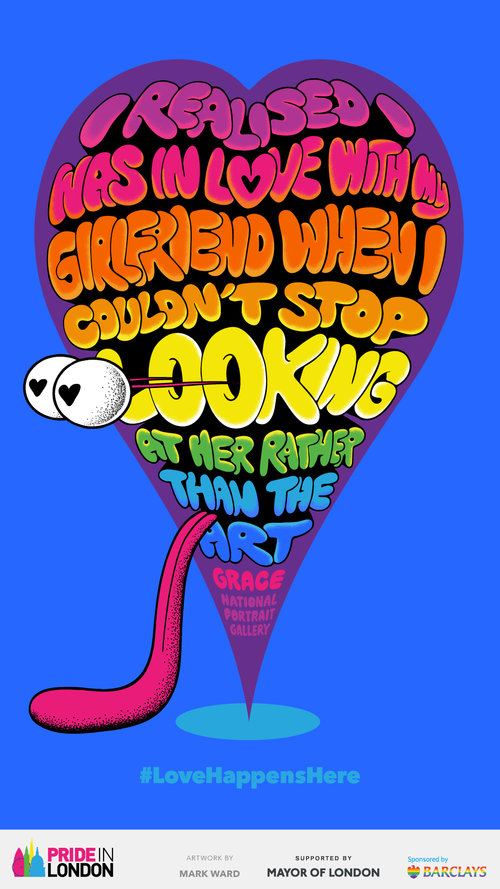 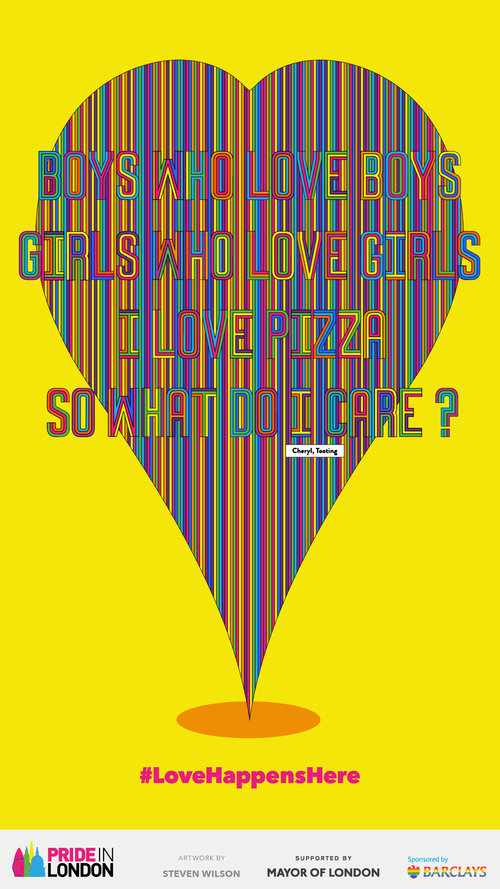 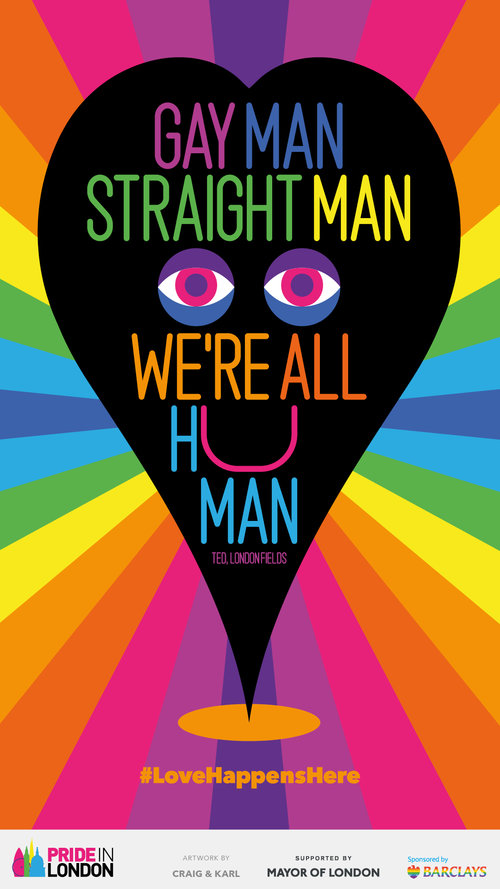 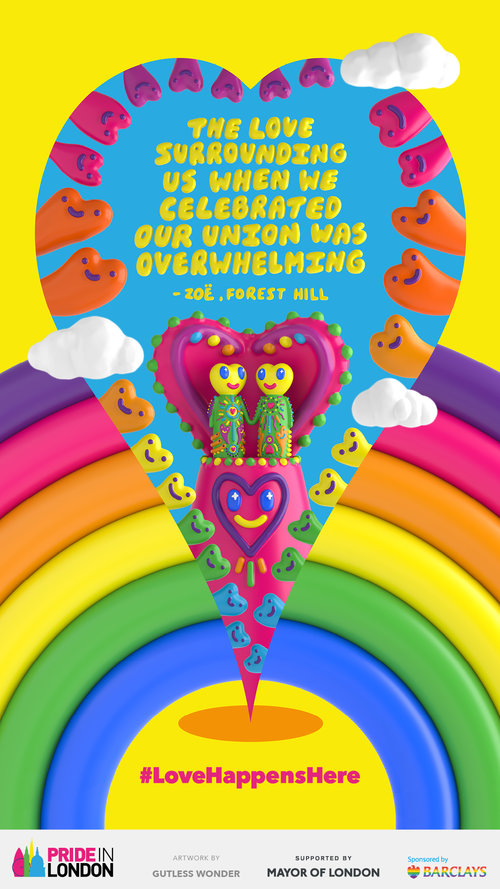 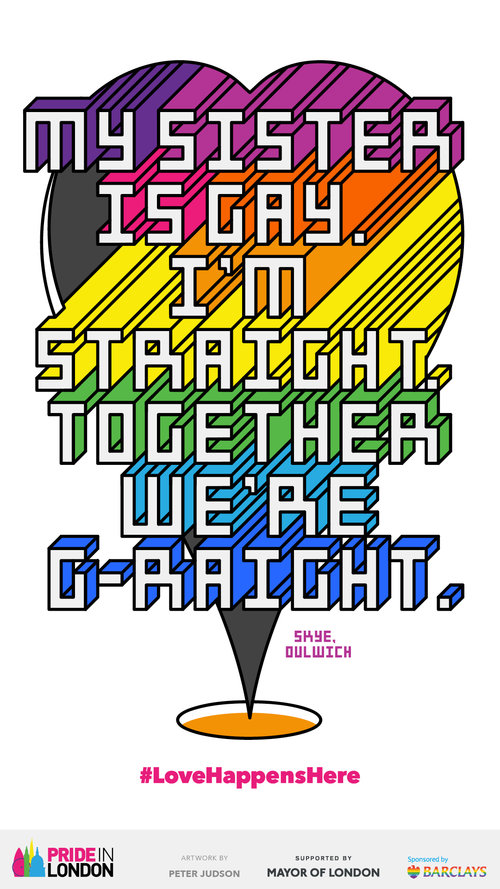 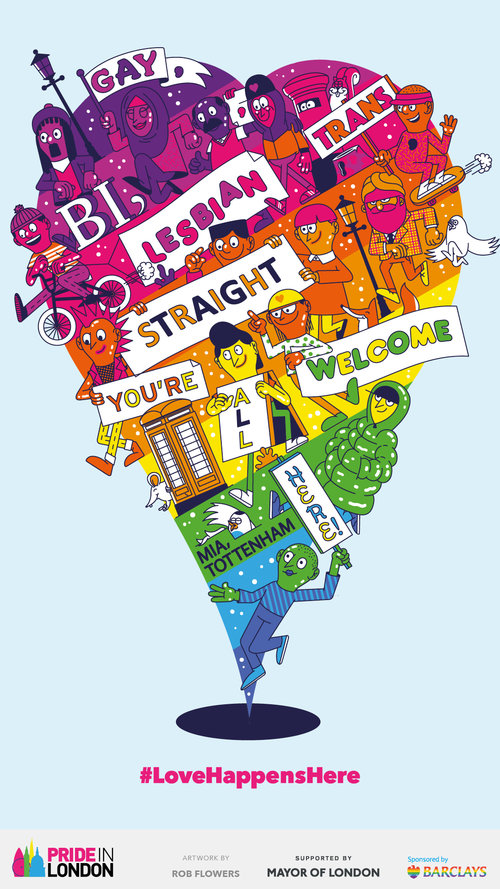 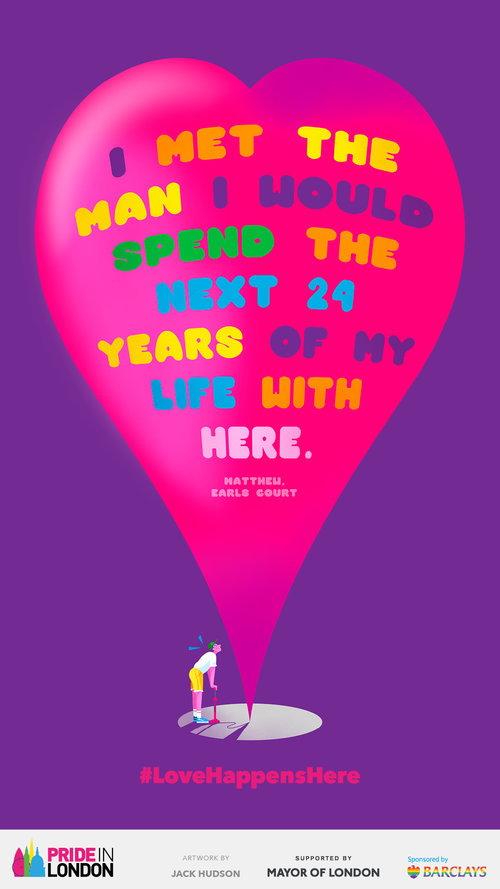 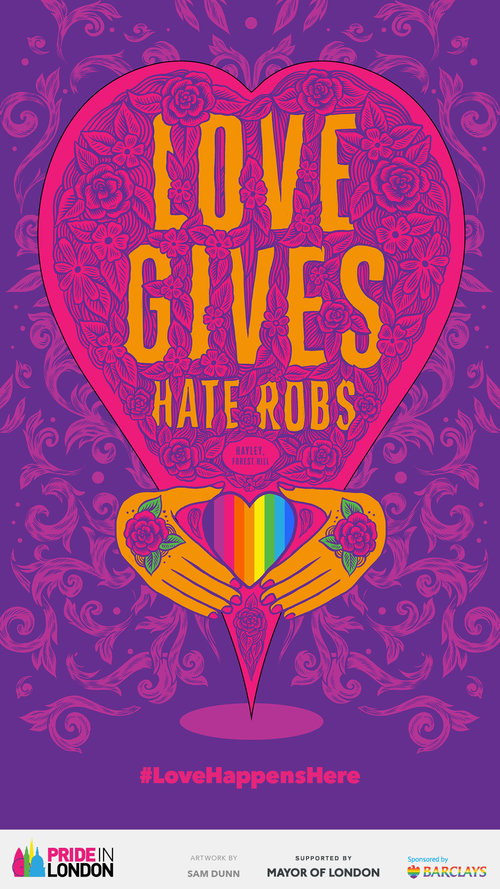 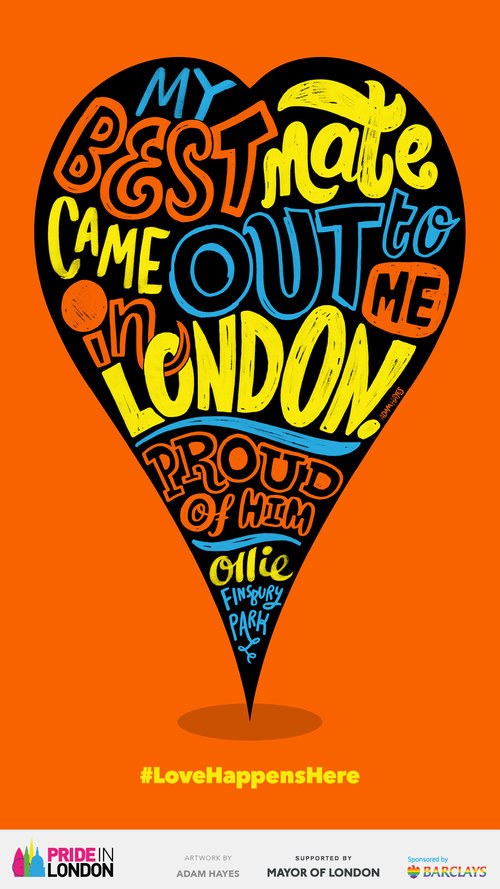 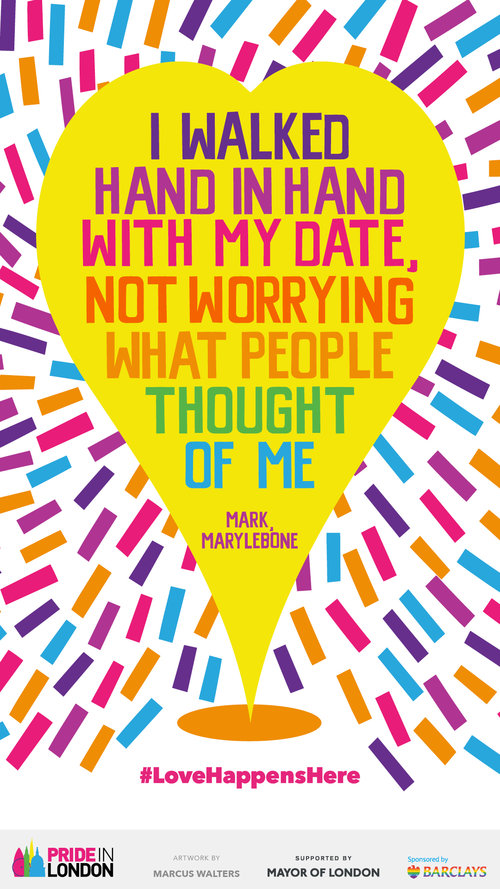 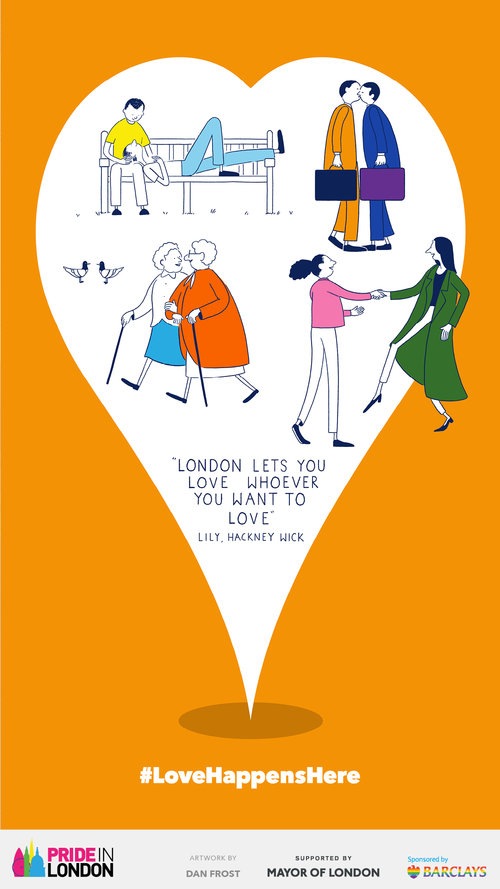 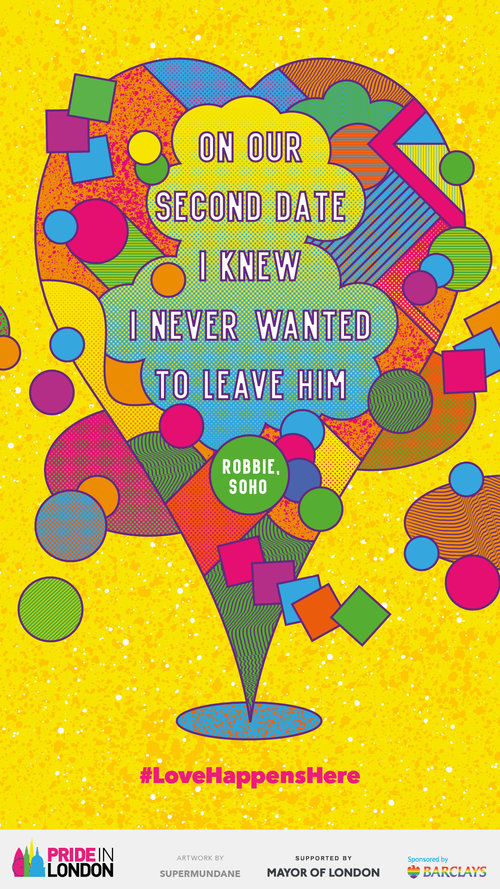 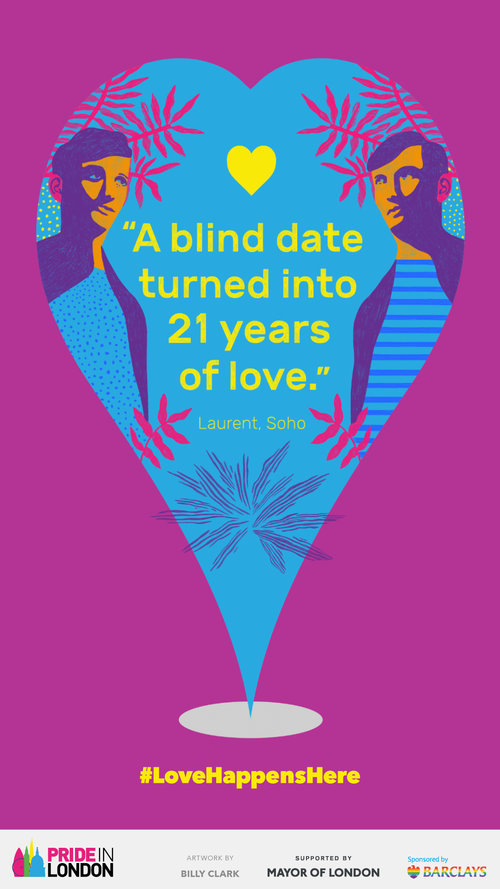 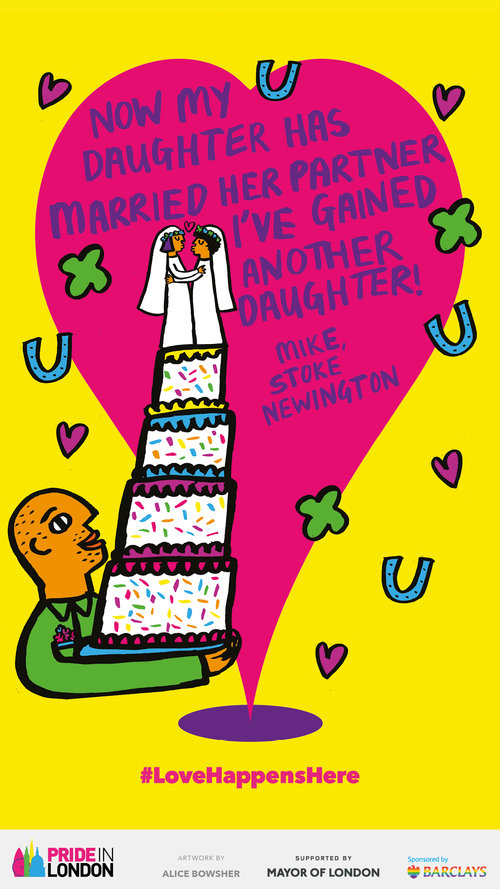 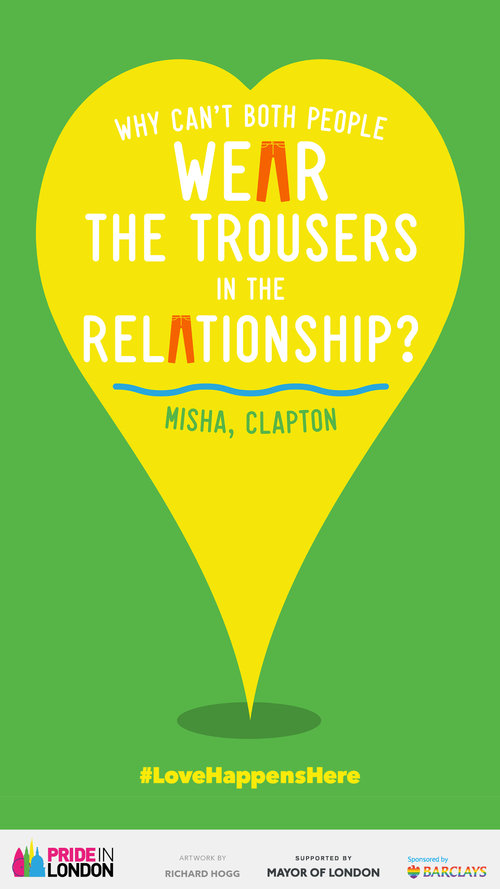 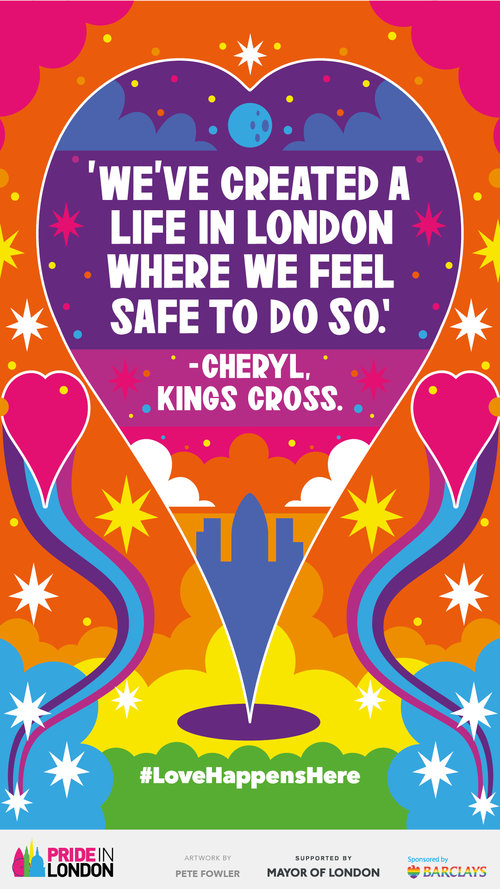 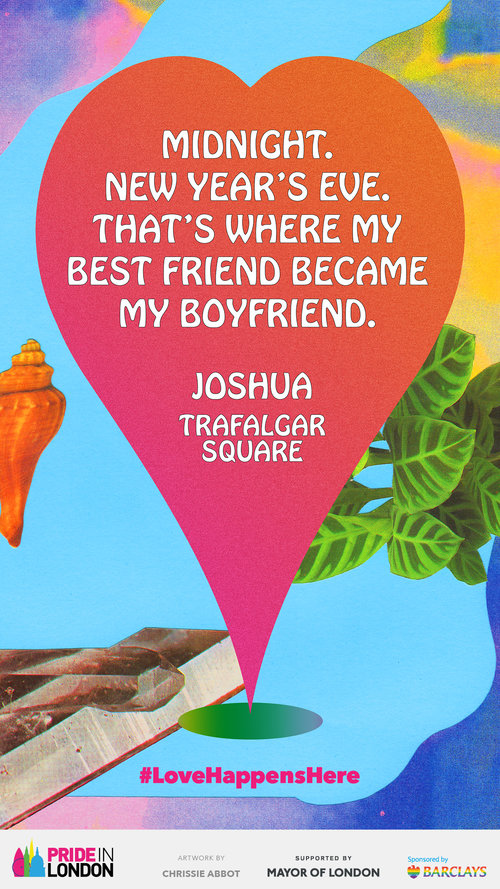 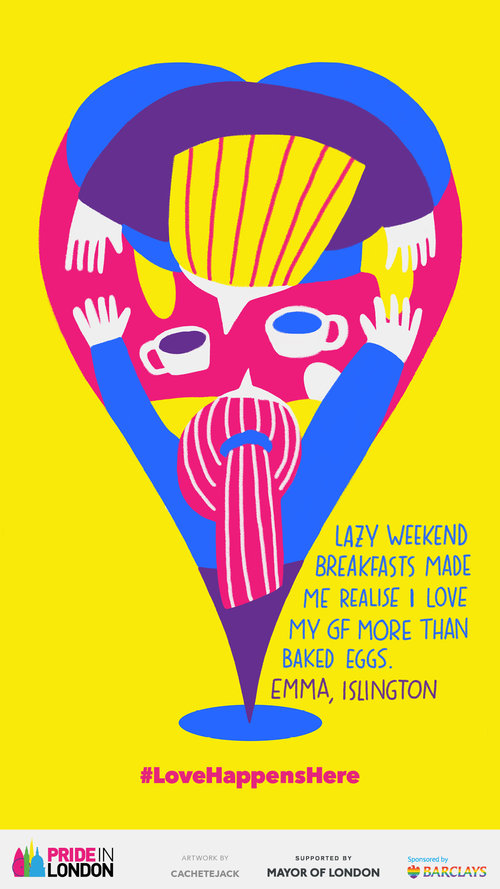 A statement from Pride in London