Pride in London returns on Saturday 2 July with its biggest and most inclusive event in history, with a stellar line-up of artists who will perform across four stages around Central London. Chartbusting pop superstar Ava Max will close the show on the Trafalgar Square stage in a year that celebrates 50 years since London’s first ever Pride march in 1972.

Following a very special parade that traces the original route from 1972, the four stages in Trafalgar Square, Leicester Square, Golden Square and the Soho Stage on Dean Street will play host to over 100 performers including stars and famous faces from the LGBT+ community. In line with the Proud of Pride pledge, organisers have worked to give prominence to members of all genders, sexualities, and heritages, making space for all parts of London’s rich diversity.

Performances and Appearances by a wealth of LGBT+ Talent

Throughout the day the stages will be hosted by a cast of expert entertainers, including Adele Roberts,Charlie Powell, Will Njobvu, Kate Holderness, Pride’s Got Talent’s own Michael Twaits, Asifa Lahore, Boo, Louis Cypher, with many more names still to be announced. 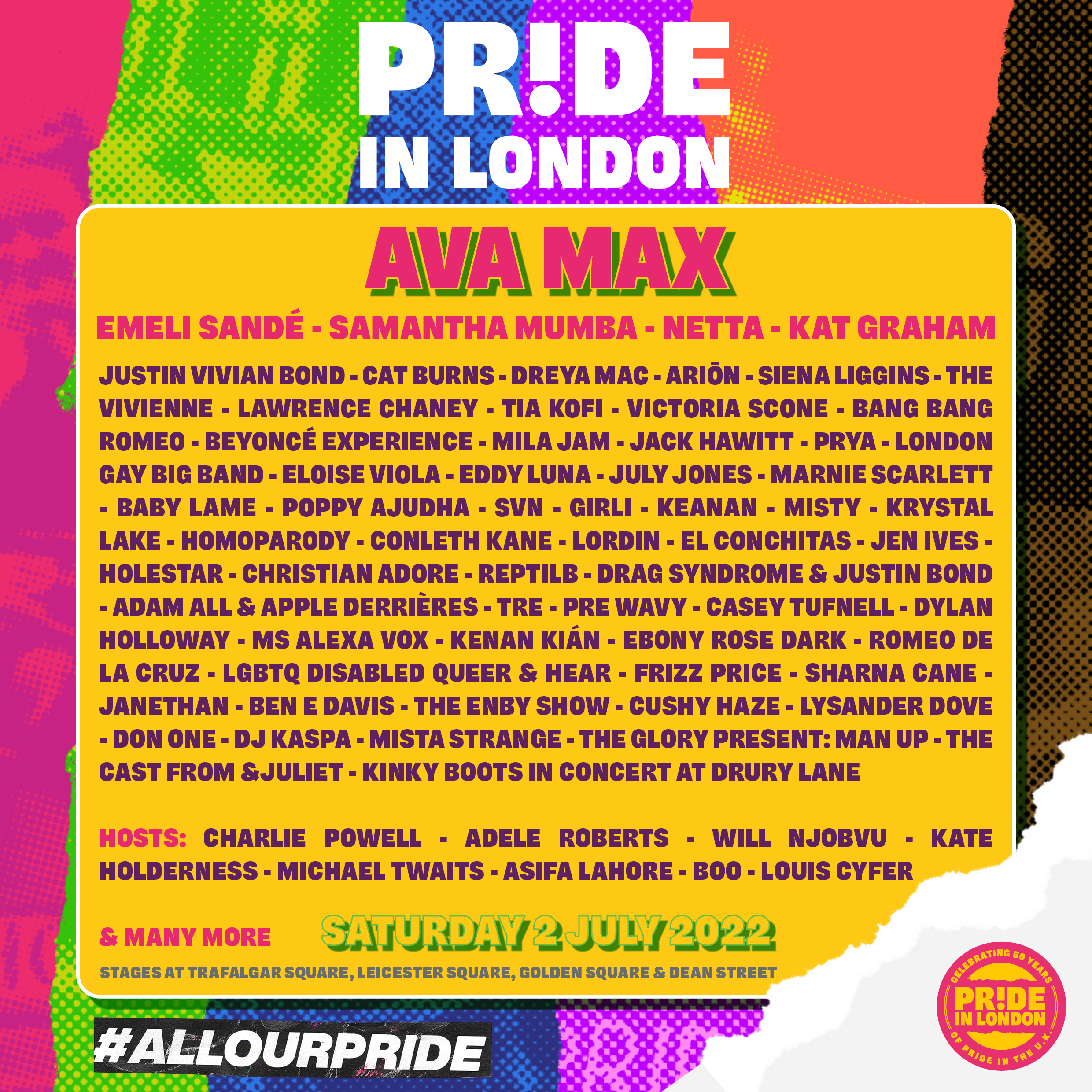 With this year’s Pride in London promising to be the biggest and most inclusive Parade to date, artists and performers from all parts of the LGBT+ family have remained a vital focus in the curation of the line-up of stage acts. #ALLOURPRIDE

It follows a huge year for Pride in London and the LGBT+ community. Pride month launched with Proud & Loudan uplifting 50 year anniversary concert at the Royal Albert Hall on 4 June with performances from Hayley Kiyoko, Calum Scott, Cat Burns and Ariōn. June 2022 also marks the unveiling of the first LGBT+ commemorative coin – the Pride 50p – which will also enter general circulation later in the year. 2022 sees Pride’s Got Talent celebrate 10 years of elevating LGBT+ talent; with a panel of industry-recognised judges, the final will take place on 26 June 2022 at Her Majesty’s Theatre with its biggest prize to date to be awarded to the winners to help them in developing their careers. And the Pride in London Events schedule as part of our Coming Out programme features over 100 fabulous LGBT+ events this Pride season.

Behind The Pink Triangle - Remembering The Nazis’ LGBTQ+ Victims